A writer's blog by Alicia Grega

It looks to be a steampunk epic with a spunky girl reporter. rampaging pterodactyls, gun fights, adventures from Egypt to Paris, and tea drinking mummies. 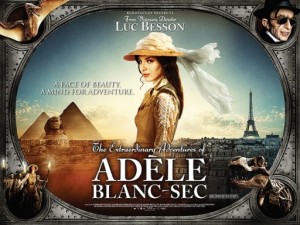 Sounds like fun to me. Another movie that we’re mostly likely not to see open in the 570.

OK, so I saw THE movie last night.
Overall, I have to say that it didn’t take itself too seriously and that was its saving grace. Think over-the-top charm a la Valley of the Dolls.
And nice surprise– Augilera was not the worst part of the film. There’s one really annoying moment after she opens her mouth and shocks everyone with the power of those mutant lungs (the film’s words) that the actors sound like they’re breaking character to ask the real life Christina how she can sing like that but, we in the audience were all just wondering the same thing, so …

So what was the worst thing? Hands down — the script. One predictable cliche after the next. We laughed out loud when we probably weren’t supposed to. And the most complex and potentially intriguing characters — real estate tycoon Marcus (remember cutie patootey Jason Dean on Charmed!) and Kristen Bell’s Nikki were left unexplored — their purpose seemed to be as a bouncing board for our heroes Tess (Cher) and Ali (Augilera).

The best part– eye candy. Most of the style was blatantly ripped off from Cabaret, Chicago, etc. But the set was GORGEOUS! I WANT THAT THEATER!!! The makeup was beautiful. The costumes were beautiful. The lighting was ridiculous. Every other scene was bathed in impossibly golden early morning light streaming through the windows. Cam Gigandet is impossibly chiseled in his jeans with the button thoughtfully left open.
Stanley Tucci was the heart of the movie. The most touching moment evolves out of his one-night stand with a wedding DJ. My favorite moment, however, has to be the parking lot fight between Tess and Nikki. It’s so good, I won’t dare to ruin the suprise. But it’s sooooo over-the-top, a live camp theatrical reinactments is a must. At this point in the drinking game, everyone chugs.

Alan Cumming was sadly underutilized. I’m afraid they offered him a nice chunk of change to add an air of legitimacy to the flick. The most authentically burlesque number in show was a great Cabaret-inspired dance bit featuring him and two female dancers that got shoved into the background of one scene.
While largely fauxlesque as anticipated, there was one fan dance-ish number in which Christina actually did strip although we saw nothing. Not sure why there couldn’t have been more of that — maybe because it would have been unavoidable to show twirling pasties, etc. at that point? What kind of a rating would that have gotten?! There’s a scene which should have been cut but must be part of Cher’s contract in which she rehearses “You Haven’t Seen the Last of Me” in its painful entirety after hours. We politely sit through it out of respect for the icon wondering, “wouldn’t it be ironic if this is the last we see of her?”
During the long awaited for and bizarrely unsexy love scene, Christina likewise performs a painfully long ballad in a sheath of green satin that shows off her disturbing alienesque lack of hips.

In the end, we had fun. Shameful as it may be, I will likely be buying this movie and screening it as the decadent background for a mindless evening of general debauchery and drinking game shenanigans.

The Overlooked Community of Scranton, Pennsylvania

Girls on Fire: Constructions of Girlhood in YA Dystopian Fiction

The good, the bad, and the stupid in manga/anime, movies, books, and more from the view of a feminist

Engage Yourself with WordPress.tv

The Literary Magazine of the Osterhout Free Library

Read On. Write On.

because words have power

meandering on & off the page

Do you walk to school, or do you carry your lunch?

This is the blog of Kal Spelletich. CONTACT: Spellkal (at) gmail.com + Art, technology, humans and robots, and, well, the journey http://www.kaltek.org/