A writer's blog by Alicia Grega

Such a thrill to see the legendary Melanie perform at SteelStax in Bethlehem last night.

I had seen her once before at the Fine Arts Fiesta in Wilkes-Barre, of all places, with my mother, and probably my daughters. It was my mother’s album collection that first turned me on to Melanie when I was of that age we are when we are interested enough in music to start rummaging through our parents’ collections.

Melanie was a poetic and artistic influence in those formative years when I was seeking powerful women with whom I might identify. But she was also a key emotional support during those confusing years I first lived on my own at college. I had a lot of bad days back then – struggling with hormonal mood swings, low self-esteem, and undiagnosed mental issues including OCD (intrusive thoughts) and depression that lead to substance abuse. When I felt really bad, I’d close myself up in a room, blast Melanie records and sing at the top of my lungs. Like I had to expunge the emotions or I might explode. I recognized it when I saw Bridget Fonda listen to Nina Simone in the Americanized-version of La Femme Nikita, Point of No return. Melanie was to me what Nina Simone was to Fonda’s character. 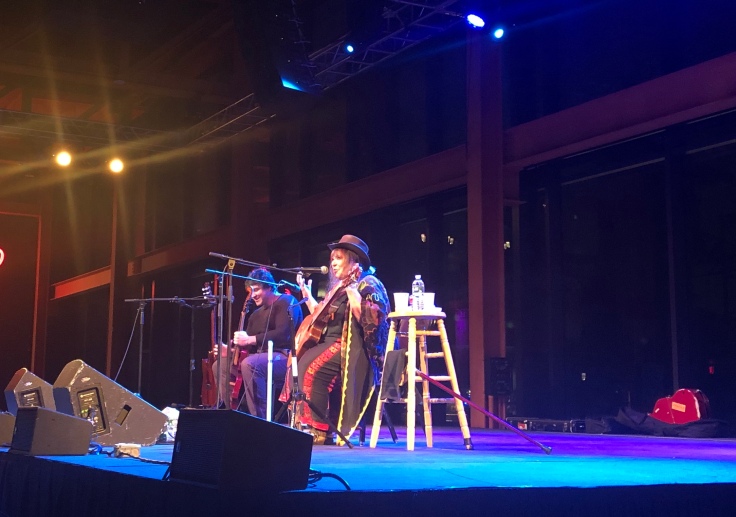 It was more than kind of my mother to purchase tickets for her and I and my sister to experience Melanie live in the cozy Musikfest Cafe. My mother and I love each other deeply, but we often fail to connect.  Melanie’s music is a clear thread. We could agree on this thread even as I often hold my breath for fear of political landmine slippage. The fourth ticket went to an old friend of my mother’s who had introduced her to Melanie. A man known then by the telling nickname “Flower Power.” He’s the first person I remember talking to in person who was actually at Woodstock. And after we got to hear his wild story over dinner, we got to hear Melanie share hers between songs.

She was only 22 years old when she played at Woodstock. Filling in for the Incredible String Band who did not want to play in the rain for fear of electrocution, Melanie took the stage a nobody and seven songs later, left a celebrity. She told us about a spiritual experience she had after sitting alone in a small, empty tent backstage for hours before finally walking up the ramp to the stage. She left her body in front of all those people before opening her mouth to sing. I wanted to see it.

Why hadn’t I seen the footage of Melanie performing at Woodstock before, I wondered. Only fans have. Comments on the video below mention that she was cut from the movie. I didn’t shout out a request for “Tuning My Guitar” at the show last night, but it’s long been my favorite. I hadn’t realized she performed it at Woodstock 50 years ago. No wonder they fell in love with her.

This song has helped me tremendously over the years – to remember that it is okay to take time for myself. That I can and should take those moments of self-care, to make myself fit to be a person who can produce and thrive and on the best days, be a good role model myself.

The Overlooked Community of Scranton, Pennsylvania

Girls on Fire: Constructions of Girlhood in YA Dystopian Fiction

The good, the bad, and the stupid in manga/anime, movies, books, and more from the view of a feminist

Engage Yourself with WordPress.tv

The Literary Magazine of the Osterhout Free Library

Read On. Write On.

because words have power

meandering on & off the page

Do you walk to school, or do you carry your lunch?

This is the blog of Kal Spelletich. Spellkal (at) gmail.com Art, technology, humans and robots, and, well, the journey http://www.kaltek.org/